Sign Up To Get The Full Course Right Now!

Yes, I am ready to get started today!
* we will not spam, rent, or sell your information... *

Attention: People of Black African Descent from Around the World!
THE PREREQUISITE
An EXPERIENCE of the International Black Summit! 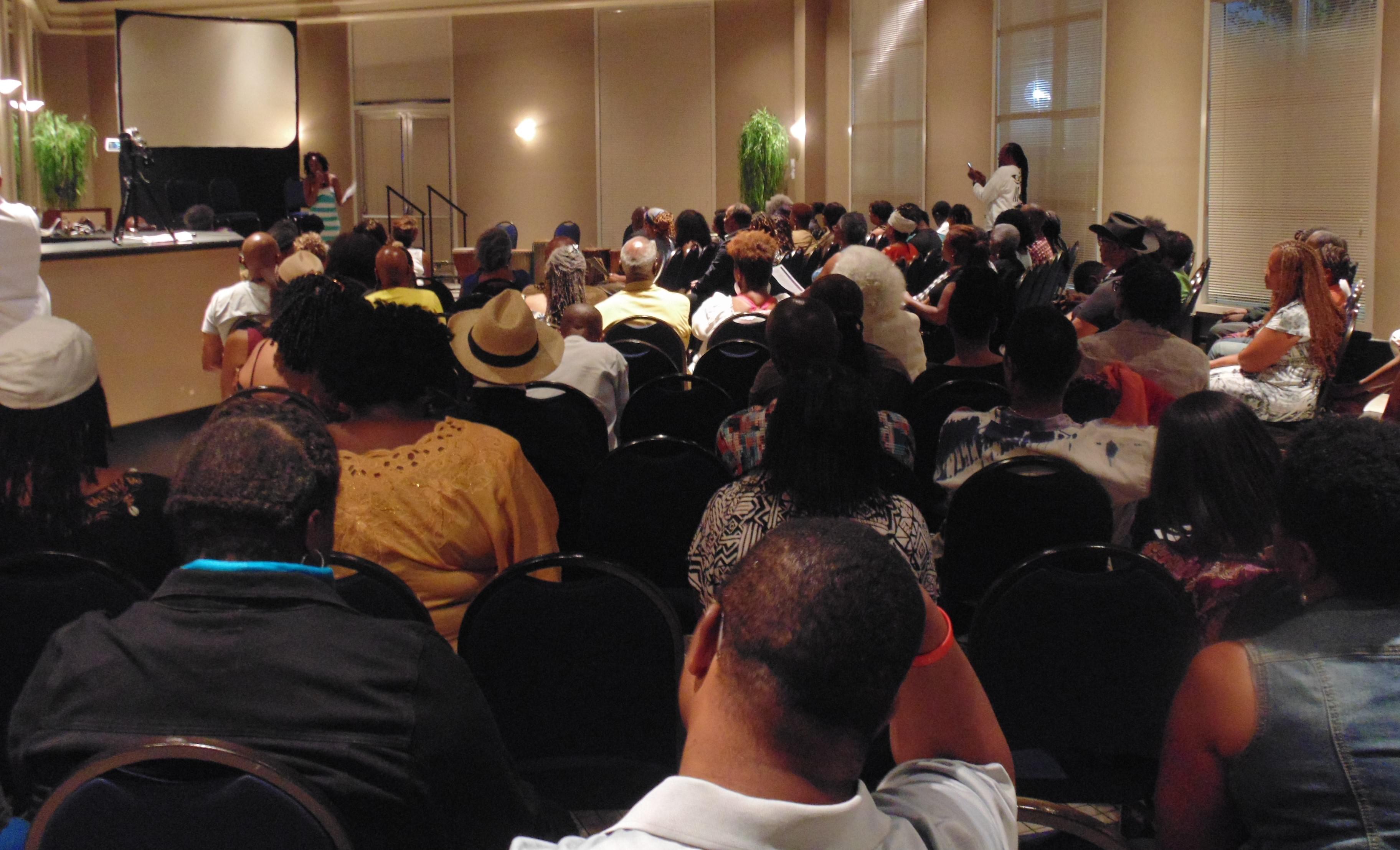 Attend THE PREREQUISITE
March 30, 2019 on ZOOM
10am - 7pm EST
Kellogg Conference Hotel at Gallaudet University
800 Florida Ave NE
Washington, DC 20002-3695
(202)-651-6000
Online link for hotel reservations for ASE 2018 in D.C.
https://reservations.travelclick.com/10458?groupID=2293430
Participate either on location or via video conferencing *
The International Black Summit is a conversation being given by Life, to the world, through people of Black African Descent.
The Conversation finds its expression in the Declaration of The International Black Summit.
If You Already Know You Want To Attend
The Prerequisite . . .
Click Here To Register!
What's In It For You?
A One-Day, intimate environment

the basics of what the Summit is, its history, how its organized, its teams, bodies, etc.
the distinction, Authentic Listening, a tool which when used in your life may improve your relationships, enhance or improve your ability to communicate and reduce the amount of time in upset

and possibly, some sense and/or a renewed sense of, your VISION for yourself, the black community and the world.
In short, an experience of participating in the Annual Summit Event.

participants are provided an experience of being introduced to and immersed in, the conversation of the International Black Summit, its distinctions, inquiries/declarations and the current year's conversation. 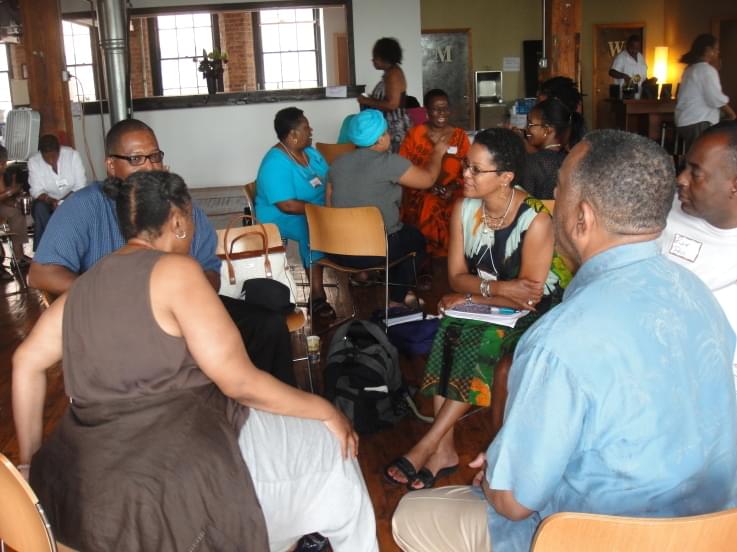 What Is The Prerequisite Course?

If you have not ever attended an Annual Summit Event or the Prerequisite Course, then the Prerequisite Course is mandatory prior to attending your 1st Annual Summit Event.
Onsite Registration and Check-in begins early Thursday morning. (early Thursday morning, usually 7-9am if at the ASE. If another date, usually 9am.)
Stand-alone Registration and Check-in begins before the course, 30 mins prior.
The Prerequisite Course begins at 10am and usually last until about 7pm, and if onsite, in time for participants to attend the Opening Night Ceremony Thursday evening
Meet and greet accompanied by music in the background, sets the tone for further introductions and establishing relationships which began the evening prior. The session continues with an overview-including the history, purpose(s) and Declaration of The International Black Summit, ground-rules for the 3-day Summit dialogue, and introduction of the Facilitators and their role.

An inquiry and exploration of possibility commences as participants share their visions for themselves, their community and the world. As engagement expands, Summit Distinctions are provided as tools to move visions forward to the next level.
As visions are spoken, similarities are noticed; information of natural networking possibilities are seen and revealed; teams, groups, coalitions are formed, etc. Dates, times and locations for follow-up may be made for Shared Visions.
Its PURPOSE is to prepare you "to create the space of listening to people authentically" - a powerful tool for your life - and to also prepare you to fully participate in the Summit, whenever you choose to participate in it.

This course provides you the Summit Distinctions, the Summit Questions/Declarations, and today's Summit Conversation.
The experience is one you can use to become present to your vision and who you are being in relationship to it. 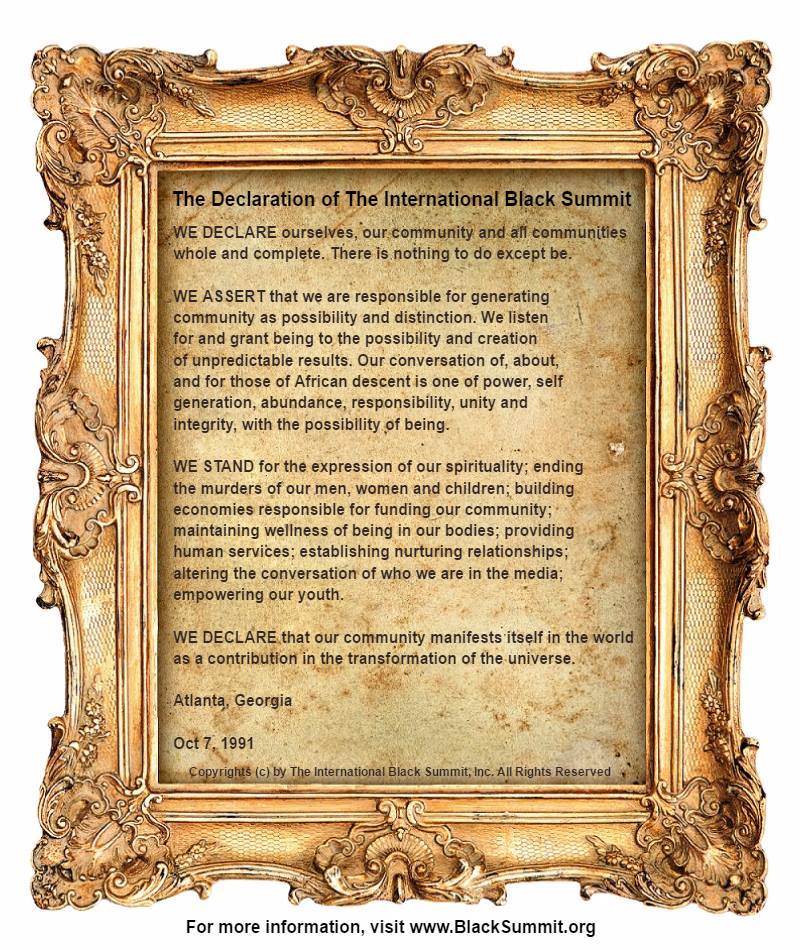 Now that you see what's in it for you AND you want to attend . . .
Click Here To Register!
Who Are We?
The International Black Summit, Inc. is a 501c3, 100% volunteer lead organization. Founded by, attended by and delivered to people of black African descent committed to empowering and transforming the lives of people of black African descent around the world.
Since 1991, we have held annual events on 4 continents, in 11 countries and 27 cities.
Over the years, as the lives of families transformed, The International Black Summit has expanded to be an inter-generational gathering, bringing together adults, youth, young adults and elders to be in relationship with each other.
At the same time, there are safe spaces that provide each age group the opportunity to be fully expressed while they share and nurture their vision. 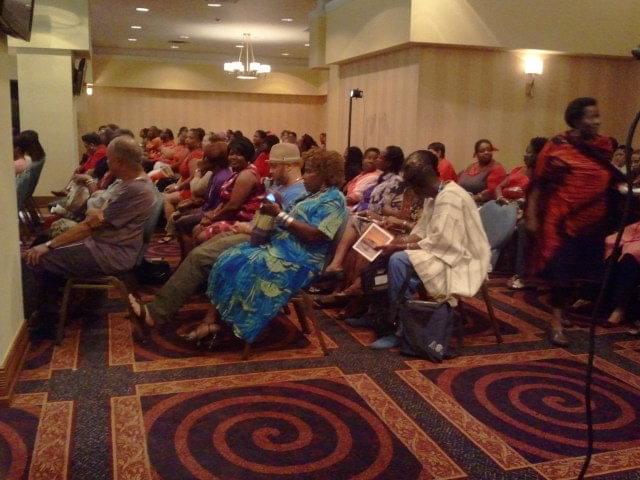 The purpose of the International Black Summit is to provide an opportunity for participants to bring into being their vision for the black community and the world. 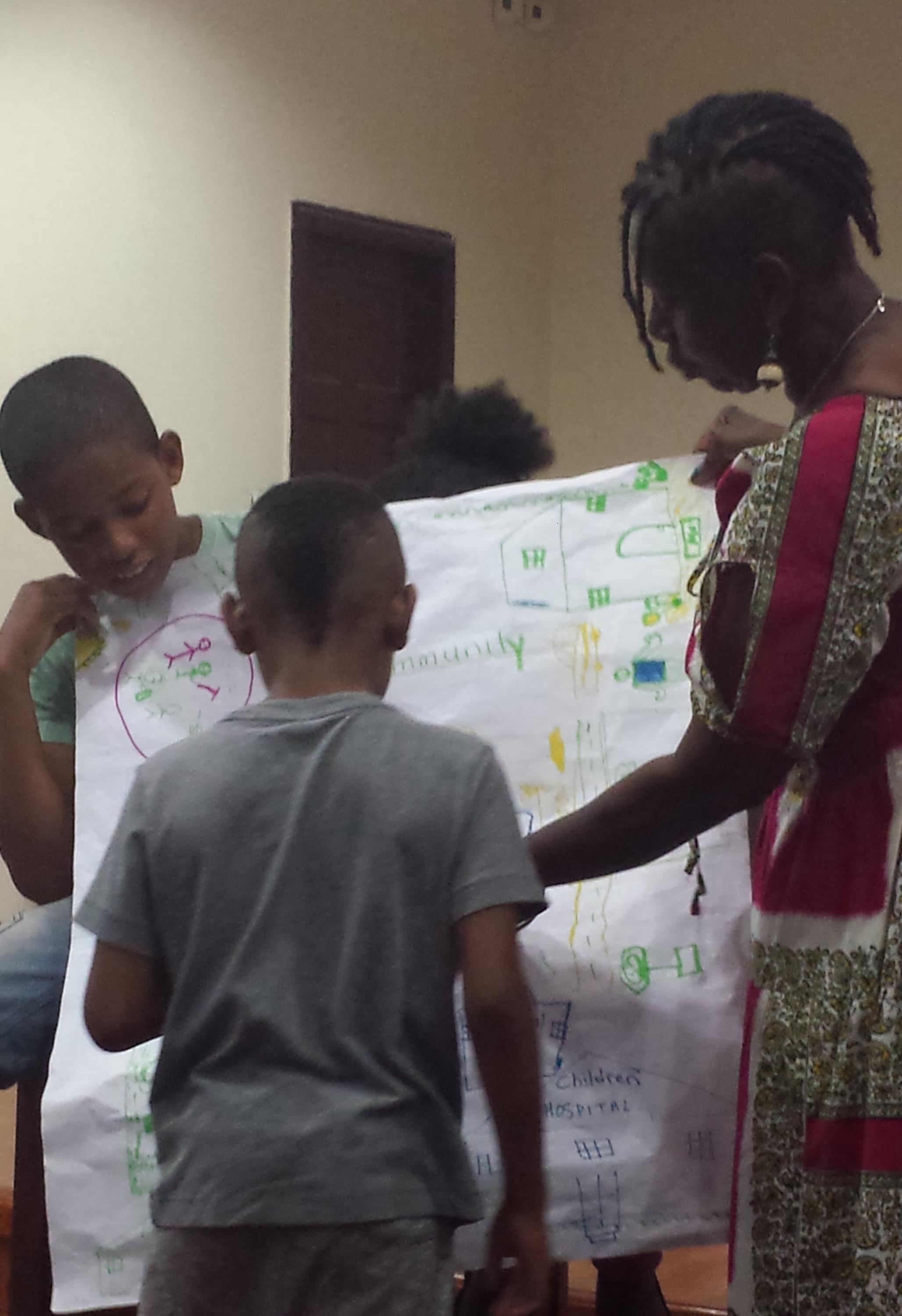 The International Black Youth Summit exists to facilitate the connection, self-expression and empowerment of young people of African Descent around the world. Youth participants, age 8-17, are young people making their visions real in their communities and exemplifying the principals of youth, transformation, love and possibility as a powerful approach to the universe. 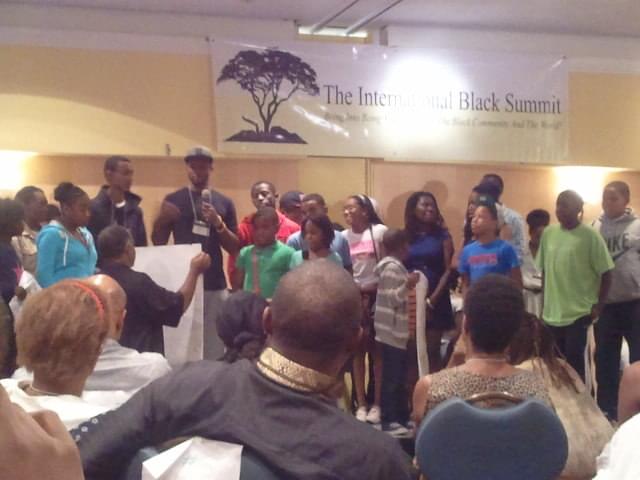 The purpose of the International Black Young Adult Summit is to provide an opportunity for participants' ages 18 to 35 a space for reflection, communication, mentorship and growth, through vision creation and implementation. This conversation empowers young adults to powerfully transition to adulthood equipped for global success.
What are you waiting for?
Click Here To Register!
Here's What Some of Our Participants Have to Say....
"I think the Summit is a great place for people to experience being themselves and being loved for it." 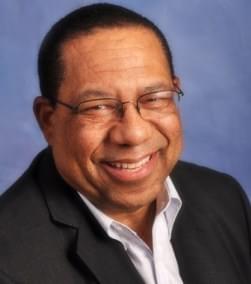 Bill D., Raleigh, NC
"Through my work at the Summit, I have been able to dream BIG and accomplish even bigger things. I have also gained a balance in my life that has brought peace and fulfillment in a way that I could never have imagined." 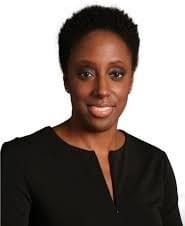 Jan C. Toronto, ON
"It is a conversation that is so spiritual that it always brings me back to myself, and through it, I see my Divinity." 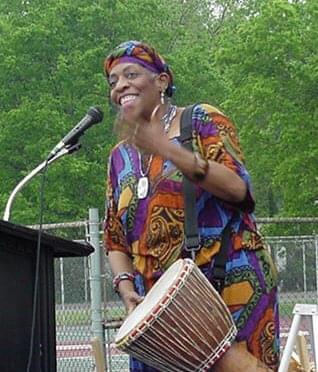 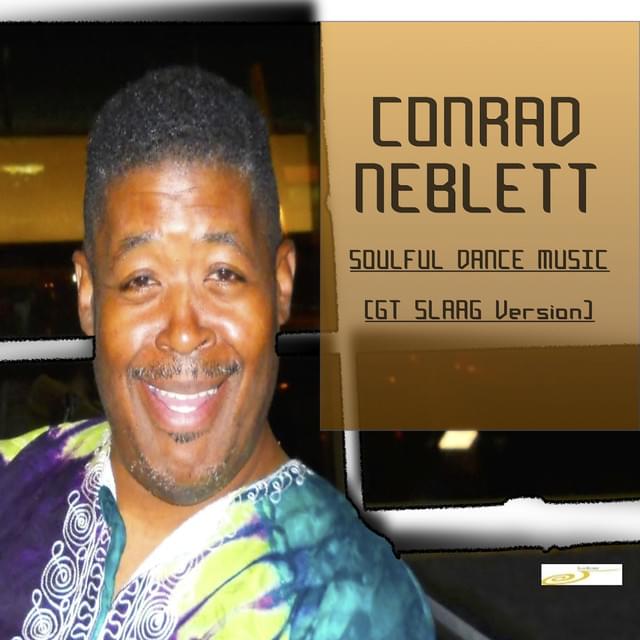 Conrad N., Asbury Park, NJ
“The International Black Summit has touched me very deeply. Whatever it is that Slavery has taken from me and from all people of Black African descent. I say that the Summit  puts it back. I’m talking about religion (spirit) dignity and self-esteem. I’m talking about  love and appreciation for who you are and what you provide. I’m talking about you matter and so do all of us.” 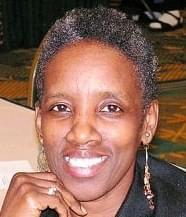 Nancy S., New York, NY
Some of the visions which have come to fruition from participation in The International Black Summit 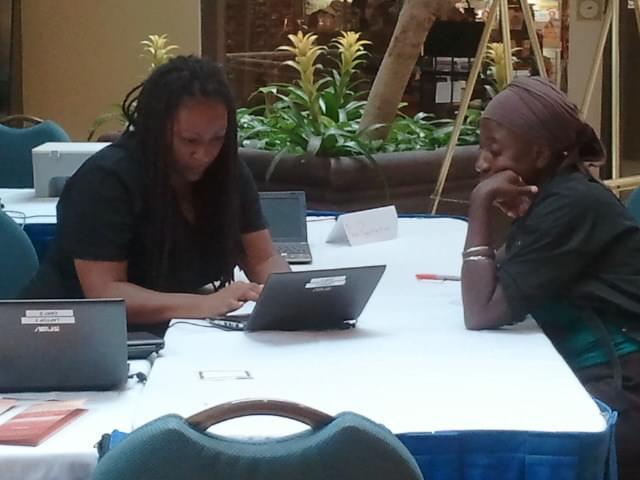 On-site registration accepts Cash, Credit Cards and Debit Cards, USD only. NO CHECKS are accepted at the Annual Summit Event.  DONATIONS ENCOURAGED.
While transformational events like ours may cost between $300 to $1,000, our commitment is to make participating as affordable as possible.
The following rates reflect our commitment to honoring two (2) of the statements in our Declaration . . . "establishing nurturing relationships" and "building economies responsible for funding our community." In other words, our intention is to take care of ourselves while taking care of you - win/win.
Prerequisite Registration Rates 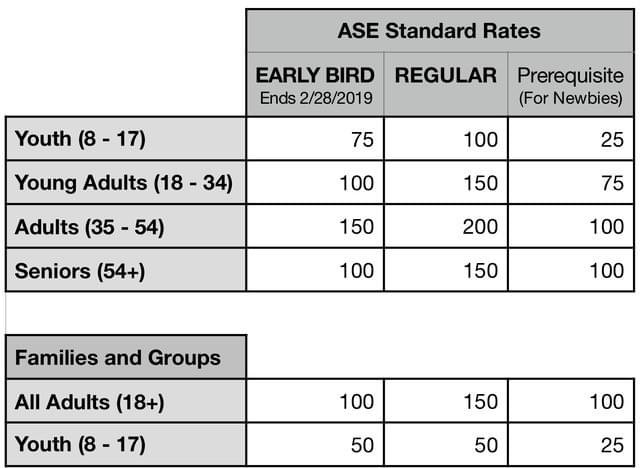 If you have a financial and/or other consideration which may prevent your intended participation in the Annual Summit Event, please request a conversation with a Leadership Body member to explore other possibilities via our Online Contact Form.
Join Us Today for Our Upcoming Annual Event in Detroit, MI
"This is an historical event, equivalent to the convening of the United States Constitutional Convention. We are about to shift the direction the world is taking . . . for ALL PEOPLE."  Excerpt from original letter of invitation to participants to the First International Black Summit 1991.
*Unable to attend in person?
Join us via video conferencing by completing the Virtual Participation section on the Registration Form.

We're waiting for you!!!
Click Here To Register!
Help us spread the word!
Please share this page with your social network!